I told you it would end up being semi-regular!  😄 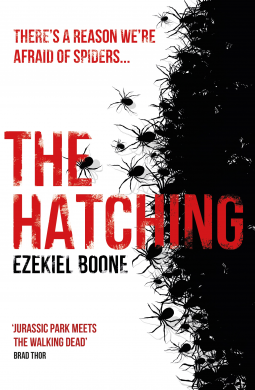 Huge thanks go to Redheaded Booklover for turning me on to this book.

Don’t let the comparison to The Walking Dead on the cover fool you, this is a pacy, well written book with the creepy factor turned way up

There was screaming , but there was more than that. There was a rustling sound, a sort of clicking and flicking . It sounded both lush and creepy. The bodyguard lumbered to his feet, but there were patches of black over his back, his arms, on his head. Henderson couldn’t figure out what the patches were, but then he realized they were moving, splitting and swarming, re-forming on the bodyguard’s body no matter how much he swatted and brushed at himself. And then Henderson felt his stomach go liquid again, because from where he stood in the woods, even with the foliage fracturing his view, it looked as if the bodyguard’s face was melting, the skin sloughing off to show flesh and muscle and then bone. The man was still standing, screaming, thrashing at the air, at his head, at his body, but the blackness only grew more solid.

In a nutshell the story is about how the world would cope if a long dormant species that predated on Humankind was resurrected. The answer, with few exceptions, is badly!

There are a ton of ‘Nature turns Nasty’ apocalyptic horrors out there but this one is a cut above most with well written scenes that conjure up images in your head better than anyone in Hollywood could dream up.

Today, however, when he tried looking out the window the light made him wince. It was like something pushing on his eyeballs. He could feel each beat of his heart like a hammer blow to his temple. Worse, he could feel something tickling inside his skull, a sneeze building up, and with this headache he knew that a sneeze was going to feel like the worst thing in the world.The pain in his head was suddenly enough to make black dots swim in his vision. He sneezed. He saw a fine spray of blood coat the wall. Snot dripped from his nose. It felt like something was skittering around in there, and when he wiped at it, he realized something was skittering out of his nose. He felt the hairy, hard leg and pulled it. Holy fucking shit. It was a spider.

The book also features a good complement of strong, female characters (including the President of the United States of America) and some other breaks from stereotypes such as a survivalist who’s also gay. Sometimes characters like this can feel like their put in to tick some boxes but in this case they work pretty well. I did however find the characters preoccupation with sex irritating at times, particularly in the case of Melanie.

This is the best horror book I’ve read in a while, I’m not scared of spiders but if I were I can imagine this being even better….either that or an incredibly tortuous read!

Today I have to take back a library book that I haven’t even started.

Pretty much a universal constant.

Coming from a race of highly-evolved humans, Julia Jaynes has the perfect life. The perfect family. The perfect destiny. But there’s something rotten beneath the surface—dangerous secrets her father is keeping; abilities she was never meant to have; and an elite society of people determined to keep their talents hidden and who care nothing for the rest of humanity.

I couldn’t help but feel disappointed while reading this book, it just wasn’t the story I wanted based on the synopsis.

Rather than telling the story I expected about a rebellious girl discovering her powers and fighting the establishment or uncovering their darker side we have a tale about her listening to a boys thoughts and feeling guilty about it now and then, an on-off relationship with the same boy and her feeling jealous of her sister and sorry for herself.

If you’re more into romance than action then this book may be perfect for you but I found most of the relationship boring and unbelievable.

The ending was particularly disappointing, there’s no feeling of anticipation of what happens next and no satisfactory resolution – just Oh, that happened. *shrug*

The cover is beautiful though..
2/5
** I received a free Kindle edition of this book from the publisher via NetGalley in exchange for an honest review **

Not my usual choice of reading matter but the ARC became available at a fortuitous time when I felt it might be helpful.

I’m a rather cynical person so some of the language used such as taking a deep breath to show respect for these words, written like a prayer started off sounding a little silly in my head. I was picturing a cross between Jean Reno’s character and the Yoga teacher from Couple’s Retreat!

However as I continued reading and giving the exercises a chance I did start to feel some benefit. I’ve been finding myself using several of the exercises recently to deal with things in my life – the visualizations are easy to do and have proven effective.

One tiny thing that did get irritating about the book is that although it’s supposed to be aimed at anyone, anywhere the vast majority of exercises were written as though aimed at people who work at a desk in an office.

In summary a helpful, clearly written and simple to do collection of visualization exercises.
4/5
** I received a free digital edition of this title from the publisher via NetGalley in exchange for an honest review **

My introduction to the Maya is a little different to most people’s as I learned of them while reading about the Native American tribes when my curiosity was piqued by playing a computer game called Colonization.

I read some online articles at the time and learned a passing amount about many of the Native American tribes. That’s what reading this book feels like, finding out little amounts of information that don’t really satisfy. While it is a big improvement on the Celtic Mythology book in this series it’s still very dry and disjointed. There’s also a strangely meandering passage about present day Mayan descendants that just feels irrelevant while what I felt were more interesting aspects such as War, Spanish Conquistadors and Environmental damage caused by this ancient civilization were merely hinted at.
2.5/5

Admittedly I’ve set a lower target than I should, mostly due to my disastrous attempt last year, but I’m pretty happy with this considering how much time family takes at the moment.

I should probably raise the target though…
What are your average targets? Do you set realistic ones or find that you try for unobtainable results? Do you find the target inspirational or feel like it makes reading a chore that you have to do?